With all the tragic events in recent times in Christchurch my thoughts go out to the People who have  been involved directly or indirectly in the disaster.

My flight was due to leave this morning from Invercargill via Christchurch to Brisbane. With the delay I will play one more show in Invercargill tomorrow night at the Tuatara Lodge. 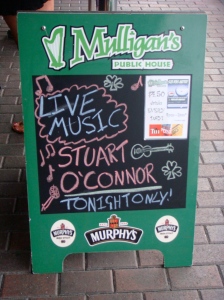 So once finished with touring the South Island of New Zealand I played on the ferry crossing to the North.
Then came a couple of shows in Wellington. Now everyone always tells me Wellington is an awesome place for live music and although I don’t doubt that is true, one has to feel a little disheartened when the response upon arrival at the venue is.
“Yeah sorry we didn’t do much promo for the show, We did get your posters but unfortunately we forgot to put them up”
Wow!!!!!
Still a few lovely folks did turn out (who had seen me 2 years prior) and ended up offering me a place to stay whilst in the area. MASSIVE thanks go out to Jannah, Emma, Stoney, Shane, and Michael for there loveliness.
Next came an epic run of shows up and down the North island with stops in Rotorua where I was housed by a lovely family from Jersey (Barry, Karin, Jacob, Fabian & Andre) who are getting settled here in NZ. Upon my travels I also met a great player called Jersey Bob. He became a good friend and someone I did a whole run of shows with upon return to the South Island.
Next came the Prana Festival where I stayed for 5 days over the new years period. I played pretty much everyday and also had the joy of catching some great music and meeting some great people. They also ran workshops and I was able to try out Shiatsu and Chi Gong for the first time.
During this time I also played a couple of shows as support to a wonderful Auckland based singer called Josephine Costain :   http://www.josephinecostain.com
She was a joy to meet and really helped me along my way during any dramas or problems that I had.
Just out side Auckland I did have one issue being that my tour van ‘Lift’ blew out a tyre. It was a scary moment as the Van rumbled and threatened to fly across the motorway. Alas I was able to keep her under control and the spare to took me the rest of the way to my show.
The run of shows in Auckland were a joy as I caught up with good friends and played some crackers (If I don’t say so myself).
I also made it to Waiheke Island where I was able to play at the Artworks Theatre with a fellow Englishman called Ian Simpson.  www.iansimpson.com 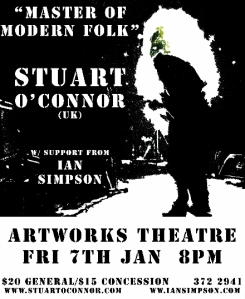 Waiheke was a beautiful place and being housed by locals was a real treat. Some epic wine tasting too :).
Back on the mainland I toured back south heading to Taupo and then to Napier where I played the Cabana and caught with old friend Greg O’Neil. He was once again hospitable as always and showed me a great british movie called ‘Dangerous Parking’. A super sharp script and a hard hitting finale. Well recommended.
Unfortunately things took a turn for the worse after what had been an alarmingly smooth month.
My Van for the duration of my NZ run ‘Lift’ Died. She passed away peacefully about 20 mins outside of Napier.
I then had to be towed to Wellington by a real nice guy called Mike.
He dropped off ‘Lift’ at a garage and then headed to Wellington city centre where I arrived an hour late for my show.
The venue punished me by refusing to pay me in full. Harsh given the shit day I had had but lessons learned I guess. I thought the fact I had been towed 4 hours just to do the show was a good effort.
So next came a few days in Wellington house sitting and cat sitting for more wonderful folks called Reuben and Chika.
A new van was picked up in Wellington, Her name is Suzi and she’s a Toyota Lite Ace. Freshly Warranted and ready for action I hope she sees me out of this epic tour.
Wish us luck.
Stoo 🙂