As 2012 wraps up it’s a tough one for may of us to think back over the past 12 months and work out what it’s been for us. For myself I spent 6 months off the road completing work on the ‘Go Forth Bright Scenic’ project of 4 albums all being released at the same time.

Then for the following 6 months I was busy on the road constantly in the UK, Holland, Italy, Japan and finally New Zealand. And it’s here in NZ that I will be seeing in 2013 as I return to the Prana festival in the Coromandel.

It will bring me great pleasure to be a part of this event.

Massive thanks to all the people who have helped and supported me throughout this trip.

To all the wonderful musicians who so generously donated their time and talents to the 4 album that make up ‘Go Forth Bright Scenic’. To the Producers Chris Hollis & Craig Harris and Mastering Crew and also to the fresh ears who helped with mixing.

Also massive thanks to the Horizontoer staff in Holland and the Sanday Agency in Italy.

To Naomi Hirata and so many great bands and venues and promoters in Japan.

To Geoff Budd (who’s computer I’m typing on now) for all the help with getting settled and sorted here in NZ.

And in a big cheesy cliched way. Thanks to all and anyone who has come to a show or bought an album.

I love doing what I do but couldn’t do it without so much selfless support.

Additional shows have been added to an already busy tour schedule.

Extra shows will be played in Auckland, Coromandel, and 2 in Hawkes Bay.

Head over to the shows page now to see the full itinerary.

And incase I don’t blog before hand. Have a great crimbo!!!!!

Jerry Mera has been a true pillar of support through out my 5 previous tours of Japan. I met him on one crazy night when I became friends with a whole bunch of musicians on only my second night in Tokyo back in 2009. We went to what is now an infamous jam night in Shibuya at a seedy joint called the Ruby Room.

Jerry frequented there weekly and would get up and jam with many of the musicians. I was lucky enough to be one of those and we became friends that night.

He’s one of those musicians that will stand by and support and help anyone he can who is putting themselves out there in that way. A true gent and a joy to know.

Tonight was a night Jerry had booked for me. Much needed help for a much confusing tour.

The evening was rammed and the audience were a wash of familiar faces and new folks. The stage was set everything was right. Now all I had to do was not play shit.

My set was again mainly new stuff but with a couple of oldies thrown in for good measure. ‘As Stubborn as a Sandfly‘ went down a treat with its beefy synth line looped with chimes. ‘You Know the Score‘ Was basically there for Jerry as I knew it was one of his personal faves.

The show was such a wash of positivity. I came off stage buzzing and had the pleasure of chilling to watch the many other wonderful bands including the Gypsy Singer with her band and Jerry Himself with Guest musicians Chaco and Harou Kubota who is a great Session guitarist who has played with Ryuichi Sakamoto. They put on an incredible show with literally no rehearsal.

Filmed by Kirra Robertson & Edited by Emma Osman the video was created as a part of their Video and Media Coursework.

You know when you’re about to go somewhere and you know it’s gonna be a while before you come back. So you know you must be packed fully. But no matter how much you go over the checklist and run through everything you need you cannot stop FREAKING-THE-FUCK-OUT about the possibility that you may have left your passport or guitar or clothes or effects pedals or leads or whatever at home.

So the trip out to Japan and even during my initial couple of days there was a nightmare. Completely baffling and it was only when I plugged in my gear and played this first show that a sense of relief came over me.

The atmosphere in the bar was wonderful and the audience were a perfect level of purely respectful and there to listen. But at the same time the occasional whoop came out when the loops got crazy – Occasional whooping – The Peak of rock N’ roll oh yes.

I felt free to play whatever I liked and I had a great time making the set up as I went along.

Starting with the tune ‘Results are Classified‘ turned out to be even more random as I never played the tune again on the following 22 shows of the tour.

Japan I have arrived!!! Now if you could just tell me how to get to Tokyo for tomorrow night that would be great 🙂

This man makes awesome music videos and I have worked with him 3 times in the past.

So when I contacted him to see if he’d like to work with me on a 4th Video he said he’s too busy with the College course he is Teaching in Welwyn Garden City (just north of London).

But then he suggested this: 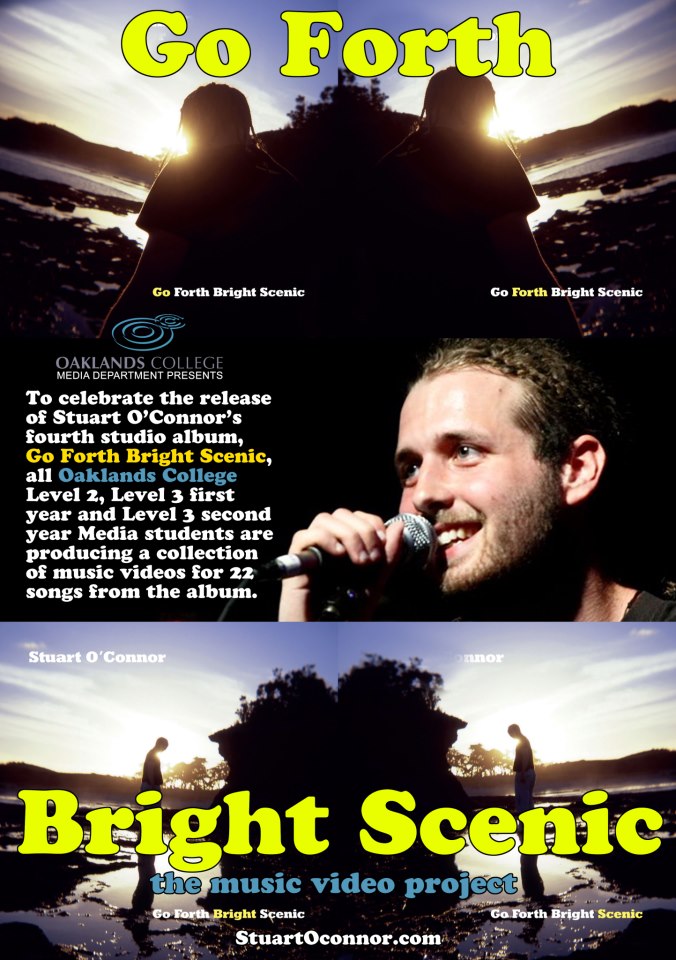 AND IT FUCKING ROCKED MY TINY MIND!!!!!!

So then I came into the College and met the students

And then the students chose their Tracks and got busy making videos to them.

And then they planned a screening:

AND THE SCREENING IS TONIGHT!!!!

Not too much more to say than a MASSIVE thanks to the students involved and I can’t wait to see their interpretations of my tunes.

So in my Rickety old tour van I make one final Drive into London to play my final UK show of 2012.

It had been a long and drawn out process playing shows but not really touring so much whilst recording the 4 albums. And this show marked the end of this period of time for me.

As you can see from the Setlist above this show was my final one in the UK for 2012.

The next stop was Japan for 23 shows packed into a month. But first this final London date.

Playing London on the whole for me had become a drag of apathy on all sides. However when I arrived for the show in Kilburn I was met with warmth from the promoter Jon and I quickly found most of the other bands to be amenable and welcoming.  Then to discover that the majority of the musicians had driven for many hours from the North West of England to the South East made me even more surprised in one respect that they were social at all. But on the other side it all made perfect sense.

When I have toured in the North West I’ve generally only had a positive experience playing shows with bands and have felt a friendly vibe most nights. Whilst London has tended to lean towards the opposite.

Anyway this show was run by Butter Bridge Records and was a joy to be a part of.

My set was mostly stuff off the new records and it seemed to go down well enough to feel like a send off of sorts.

The best thing about it for me was to catch up with an old friend in Dominique who I had known well but not seen for over a decade.

I very much enjoyed all the acts on the bill also including Fabian Holland, The Jungfraus and Proud Proud People. My thanks to Jon for having me into play.

I wish them all luck for the future.

It gives me great pleasure to able to say I’ll be playing shows between Auckland and Wellington over Christmas and through to late January as a part of the North Island leg of my NZ tour.

The dates booked so far can be seen on my shows page.

Musikal Sin have selected one of my songs ‘Dumb Mathematics’ in their inclusion for ‘Top Tracks of 2012’.

Along with some great other acts.

The complete listing can be found here:

So the final part of the tour draws to a close.

The Final show in Italy for 2012 is back in Perugia at the Gingillo Cafe.

The place has a real modern feel but alot of the artwork on the walls hark back to classic holly wood movies of the 40s through to now.

This show was special to me because it was the first chance I had to perform the song ‘This College Year‘ Live with the musicians I wrote it with. They are Andrea and Franscesco who make up the electro pop duo ‘Zero Call’.

My set was a loud all out ballsy attack of noise. I would have joyous memories of looking to Luca who had been on the road with me for the past few days and by this time had become familiar with the material. He would give me the nod to say yes you’re playing the right tune or even a frown to suggest I think of another to suit the vibe.

I was also fortunate to have sold nearly all of the music I had taken with me. The final CD was shifted in that perfectly timed moment when the final person stopped me as I was leaving and asked if I had any left.

Also the Vinyl went down a storm 🙂

So all in all a great way to finish the tour.

And I owe so many thanks to so many awesome people for the help they have given with keeping me on the road and showing me the wonderful country.

Big thanks to Luca, Franscesco, Silvio and especially the king of fighting Mina for the long Drives – Andrea!!

PS – Mina means to be super tired. I learnt this from my tour 🙂