After a lazy morning after the show in Montecarotto, Andrea and myself embarked upon 4 hours in a car on the frantic Italian highway north.

Once again the game of the chicken is here says Andrea with that thick Italian twang. By the time of arrival it is pissing with rain but inside the venue is chaotic and busy.

We soundcheck and then have a feed and a chill. The staff at Eden are lovely and full of smiles.

My set of songs is more or less upbeat through out due to the crowd and my need to hold court amongst the bussell. But mellow numbers from my Debut album do get a look in a couple of times.

After the show I met many very kind people and a good few had caught me the year before when I played there. I was a thrill to hear them say which tunes they were glad I had played and which ones they wanted to hear. Sometimes just to know people care is all you need.

My deepest thanks to all who helped to make the night what it was and again to Andrea for all his help getting me to and around Italy.

You Know The Score

Distance From Ear To Ear

Before Your Very Eyes (Atoms for Peace Cover) 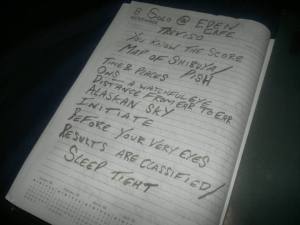 My arrival to the land of pizza, pasta and openly bizarre politics occurred the day before. Over this time much quality coffee was drunk and I was finding the simple euphoric joy of being back on the road after a week or so stationary in London.

I was met by hard working Sanday Agency man Andrea at the airport and together we chilled chatted for the best part of that day.

The first show took place at a new venue for me but also for Italy called Osteria Sotto Le Mura. It was a great live space and a wonderful building. It was also run by a lovely friendly couple who were both musicians themselves and knew the nature of the touring life all to well. They had 2 crazy big dogs that went mental at the drop of a hat and bark and run with the enthusiasm of of a child after too much sugar. They were also so big it was tough to control them. But this only led to the comedy of the chaos.

My first Italian show was to a warm crowd and there were even some folks from the UK in the audience who had relocated to Italy a few years prior. the response was warm and lovely from the locals.

The sad fact was that the venue (like so many these days) was struggling to stay afloat because the majority of locals took no interest in live music. This is an all too common experience for me to encounter when talking to independent places. I really felt for these guys and left them an LP as they expressed a love for Vinyl and shared a copy of a record Alessandro had released a decade earlier.

This was also our the first release on the Italian label ‘Locusta’ who had gone onto become a substantial influence in the independent Italian music scene over the years.

Distance From Ear To Ear

As Stubborn As A Sandfly

Before Your Very Eyes (Atoms For Peace Cover)

Filmed, Directed and Edited by Melina Georgiou & Charlotte Stevens this video was created as a part of their Video and Media Coursework.

Filmed, Directed and Edited by Ellie Marmon, Sianne Smith, Katy Jubb, Tom Deans & Tom Long this video was created as a part of their Video and Media Coursework.