My first time playing solo here in many years. Club 85 is what I consider to be my home venue.

Folks may have noticed that my tour blog follows no specific pattern of time. This is because I simply prefer to write it as and when I’m feeling it. I finished the NZ tour in May 2013 but I’m still writing it now.

So basically – Never expect a concurrent theme to these blogs. They are just rambles from my non sensible existence.

My journey through the land of the long white cloud continued south. I was lucky enough to play a show near Napier where I met a an awesome girl called Pip. She told me it would be possible to stay in her room in Wellington while she was away working for the student break. So upon arrival in Wellington I was introduced to a house full of creative people. Art students and musicians. The front room had this incredible atmosphere with challenging music blasting out through the stereo while folks would be busy drawing and creating their own works. Rowan would pace around the room often talking at length with mass enthusiasm for the music he had chosen to play. Tim & Dan (the other 2 housemates) were always welcoming and yet never overbearing. I felt very much at home among misfits 😀

My series of shows in Wellington were a total mish mash between pub crowds to established venues. Despite being hailed as the cultural capital of the country I have never found it to be much other than apathetic towards small time musicians like myself touring through.

The saving grace stories from this chapter came only in the form of the housemates from heaven. I was brought to a squat party one night where I really begun to understand the community of artists that occupied the City. It was also these same folks who came to my aid for a booking taking place at Bodega (one of the cities ‘Name’ venues). ‘Dan Untitled’ stepped up to play a support spot. It was him and Dallas (the other support) who really worked to bring a crowd. I was lucky to have a few random folks from earlier in the tour put in an appearance and my thanks to them for showing up on the night. But apart from that I had spent many days flyering the city centre and to the best of my knowledge it brought nobody to the show.

Following my final performance in Wellington I was done not just for the city but also for the North Island of NZ.

Next morning I boarded the ferry for my return to the South Island. Possibly the most scenic place on the planet.

The song has been lifted from my Electro album released in 2012. The whole album can be heard for free here:

The Video was Filmed, Directed and Edited by Cheyenne Usher & Shannon Moffatt. It was created as a part of their Video and Media Coursework.

Setlist:- (PLEASE CLICK THE SONGS FOR LINKS TO THE STUDIO RECORDINGS)

It was a busy day for me as there was first of all a Radio Session in Perugia at the student run station Radio Phonica.

The full session/interview can be seen and heard here:

From there I head onto the venue in Perugia with my food friend and tour manager Andrea.

Not before we stop off for coffee of course 🙂 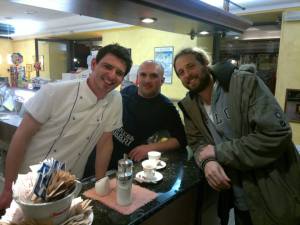 The venue was a very small space with many people tightly packed in. I felt I played well and managed to win over the initially apathetic crowd. Early tune ‘Blind Faith’ made a sneak return to the set and the Atoms for Peace cover served Andrea with a smile.

It’s an odd thing to know when one is nearing the end of 15 months on the road. This was that time for me. From here I would play a couple more Italy shows and then head to South Korea before calling a needed break to the road time.

But for now it was about enjoying the things the road was providing me with. For me tonight that was a vast array of beers. 🙂

The album launch for a good friend ‘Chris Davison’.

A chance to dip my toe into performing once more.